At my grandparents’ golden wedding anniversary party, my new fiancé, Mac gave an impromptu toast to the happy couple.  Fifteen years later, we never imagined we would once again be celebrating with Joe and Dot for their 65th anniversary.  Last month, we were lucky enough to do just that.

My grandparents are part of The Greatest Generation.

He, a World War II Navy veteran saw The Battle of Normandy in the Atlantic, Okinawa in the Pacific, and lost his parents and almost his own life in a tragic accident all before the age of twenty-one.  A devoted husband and well-meaning father with a strong work ethic who can fix anything, Joe greets life with a smile.  My grandfather is a youthful, spirited song and dance man, musician and opera lover who has serenaded and entertained generations of children.

She, a family and community matriarch who experienced divorce, fierce sibling rivalry, and an alcoholic, estranged father during her youth is a compassionate but no nonsense lady with strong opinions who keeps emotions close to the vest.  A church elder, domestic financier, caregiver, therapist, hostess, Frank Sinatra enthusiast and rabble rouser, Dot has raised, fed, housed, guided and knit elaborate sweaters for generations of children.

Joe and Dot are salt of the earth folk who grew up only a few miles from each other.  They met at work after the war, fell in love and married in four short months.  In their hometown, they raised three children in a modest, two-family house where they still live today.  Now in their late eighties, while the rest of us are busy reading up on which way to lean, they are quietly leaning on each other; much more now it seems than days long ago.

And so with sixty-five years of couple hood under their belt, I asked my grandparents to share six pieces of relationship advice, one for each decade of marriage.  Here is what they had to say:

6 ½.   Follow your heart, stand by your love, and keep promises to each other.  If you have second thoughts or believe you can’t keep your word, don’t get married.

As the eldest grandchild who lived with them until I was five and then again at twenty-two with countless visits in between and thereafter, I had a ringside seat to much of Joe and Dot’s relationship.  My take away from watching them?

Flirt, dance, sit outside, visit, celebrate, play cards, laugh, argue, reconcile.  Life is a fast and fleeting ride so keep the relationship as interesting as you collectively see fit and be sure to have a good time.

Couple hood is complicated work; everybody has their stuff and it’s not all moonlight and canoes.  But if you go by Joe and Dot, trust, compromise, balance, communication, support, love, honesty, commitment, cocktails and a song go a long way. 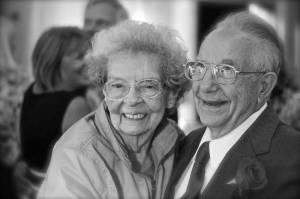