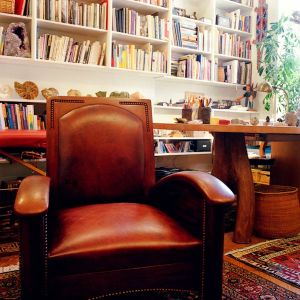 I used to tell people I would never see a therapist.  Then my young marriage to Mac began to crumble.

Having spent a lifetime immersed in family dysfunction, crumbling traveled with me; gaps in the sidewalk were the norm and I was a comfortable expert at skirting them.  It was only when Mac and I tried and failed to get pregnant, and the reality of possibly never adding Mother to my resume sank in that my feet got caught up in the cracks.

Still, I refused therapy.  “We don’t need a shrink,” I told my husband.  “We can deal with problems on our own.  It’s not anyone else’s business.”

Frustrated and tired, Mac took himself to see Amy; a well regarded and highly recommended social worker who conveniently had a home office across town.

“She wants to meet both of us,” he said afterward.  “You need to go to a session so Amy can understand how to help.”

We’d been down the counseling road before, but this was the first time Mac actually met with a person. His suggestion was Amy’s request and there was no talking my way out of it.  With her involved, ignoring Mac’s plea translated into losing him, our marriage, and the prospect of starting a family.  Backed into a corner, I made the appointment.

Amy’s home office was on the second floor of her well kept Tudor style home.  Up a small set of stairs adjacent to the living room, it was a guest bedroom, library, TV room and therapy space rolled into one.  One wall was filled with a pale, but inviting sofa adorned with embroidered pillows partnered with a cubed pouf.  I shoved myself into its corner, scratching my back against the pillow stitching.  The balls of my feet pressed against the base of the cube.  There I sat, stiff with pride ready to convince her that I didn’t need help from any therapist.

Amy settled into an over-sized swivel chair across the room, slid off her flats, and rested a tiny pair of feet on a nearby stool.  Behind her sat a narrow desk flanked by impressively organized wall length shelves.  Magazines, photographs, Judaica, and a sculpture of a molar gave me a glimpse into her private life.   I stared beyond the chair hoping my fascination with the decor might deflect attention from me.  But to no avail; there she sat, petite, blonde, plump, suntanned, manicured and ready to listen.

“Why don’t you tell me about your background; your upbringing,” Amy suggested.

That’s all it took.  As a logical thinker, model student and frugal realist, I knew on some level it made sense to embrace this chance and bank on Amy’s expertise.  The clock was ticking, the check was written, so it was time.  Out it came; the family secret I had harbored for twenty-five years.  When the session was over I knew it was going to be the first of many.  That conversation commenced our eight year relationship.

Whenever we met, Amy escorted me from the front door to the office where I took the customary position.

Because she worked from home, she made it a point to conduct our sessions with arm’s-length professionalism.  Still, Amy managed to convey a maternal sensibility rooted in spirituality and common sense.  I quickly learned that she was a little lady with a powerful presence, a strong sense of justice and an unwavering conviction to improve the lives of others.

Amy always said the right words, gave effective homework, and provided the necessary tools to help me treat wounds, shed skin, and grow up.  Some weeks her office was a welcomed respite; other times a dreaded box.  Regardless, I always felt safe.  Over time, I joined the sofa’s center and let my heels crawl up the back of the ottoman.  Together we worked through my list:

Initially once a week, then every other; sometimes with Mac, sometimes alone that office, the list, and Amy’s guidance during those first years were a constant.  Inside that space, the only variable was the magazine covers.  Consequently, on the outside I got healthier, my marriage began to mend, and our family grew.

Needless to say, Amy and I had a good thing going.

At the end of one session Amy casually announced, “Tomorrow I’m having a medical procedure.  I will not be working for awhile.”  She confidently handed over contact information for her back up therapist and reassured me she’d return.

Several weeks later, Amy and I reconvened.  I immediately noticed a shift in the tenor of our conversations.  Her approach, albeit professional was more direct.  She also began to sprinkle my therapy with an occasional personal anecdote.

Treatments followed the medical procedure.  Amy shared very little information; only that as a result, she might need to change our schedule.

For months, I sat on the couch and watched her deteriorate; plump shrunk to thin, her blonde hair faded, and the suntanned skin grayed.  Amy seemed tired but determined to live her life.

When her color came back and hair grew thick, Mac and I breathed a sigh of relief.  She shared that whatever growth she had was smaller, but required ongoing medication.  Amy sounded stronger and had a renewed outlook.

Two years and she never used the word cancer, but Mac and I knew.

Then Amy took a downturn; more treatments, more medication.  Each time I saw her, it felt as if she was fighting less for normalcy and more for life.  But because I was her client, our time together was focused on me.  She wanted it that way.  I was deeply concerned about her health but I let her do her job.  Amy wasn’t giving up on me, so I refused to give up on her.

One evening session, her office phone rang several times.  Amy uncharacteristically picked it up.  I noticed her elevated legs were bloated and swollen.

When time was up, Amy paused for a moment; long enough for me to believe she was debating her thoughts.  Then she asked the usual question, “Do you want to schedule an appointment now?”

She walked me down the stairs to the door.  “So we’ll plan to meet in two weeks?”

Two weeks later, I went back to her house.  This time, I let myself in; I didn’t go upstairs.  Instead, I joined a group of familiar faces on low, hard, black leather chairs.  I kept my feet firmly planted on the living room rug, hands clasped in my lap.  The faces were Amy’s family.  I was paying a Shiva call.

I listened to her adoring husband share his memories, watched her devoted son, daughter, and pregnant daughter-in-law keep busy, and smiled at her spirited grandchildren as they played on the stairs, disappearing into the office.  These people were no longer the characters in Amy’s anecdotes, the aging images in her photographs, and the fairies that left toy remnants on the rug.  They were real people who lost a cherished loved and I felt sad for their devastating loss.

But it was my loss too.  I was there to pay condolences, but needed some of my own.  Yes, my relationship with Amy was professional; it was also intimate and sacred.  Even though I needed to mourn the loss of my therapist, I resisted the urge.  “Amy was not family or friend,” I thought, “It’s not my place to grieve this woman.”  Surrounded by those closest to her, I felt guilty and unworthy of sympathy.

I soon realized that it was okay to grieve, just not right then.  I spent close to a decade healing in that house but now Amy’s home was no longer my therapy place, and her husband and children were not the ones to console me.  It was again time; to turn inward to my tools and outward to my loved ones.  My work with Amy was done.  I was ready.

As I left, Amy’s husband and I exchanged a knowing glance, smiled and said, “Stay well.”

It has been years since Amy passed away.  Larry and I sometimes talk about her when we have an issue, need to reflect, or feel sad she’s not here.

Recently, we were recalling Amy’s modestly attended funeral.  She was our rock star.  Her work changed my life and saved our marriage.  It will have an impact on us, our children, and family for generations.

“Why wasn’t there a line of mourners spilling from the sanctuary?” I asked.  “Where were all her other fans that day?”

Then Larry reminded me, “Amy was an ordinary lady who happened to do extraordinary work.  She was the best kind of person.”

He was right.  For that, I am grateful.