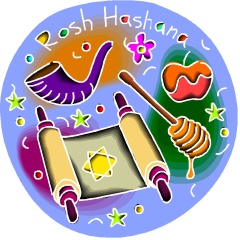 After Hurricane Sandy, roughly six weeks post Rosh Hashanah 2012, we temporarily moved into my in-laws’ apartment.  The building is home to a number of observant Jewish families, my in-laws included.

Waiting in the laundry room, I noticed a grandma folding clothes while her four-ish year old twin grandchildren, a boy and girl played nearby.

After he got a few lines into his song I said, “That’s a nice tune.”

“Yes.  I haven’t heard that one before.”

Right then his sister whipped her auburn curls, looked me dead in the eye and declared, “That’s because you’re not Jewish.

“Watch what you say to people!” Grandma barked.

Watch what you teach her, I thought.

I bit my lip and explained, “The Rosh Hashanah song I know is different.  It goes like this…”

I sang a few lines of my holiday ditty.  Thankfully the dryer’s buzzer went off.  I took my clothes, wished them a good day and left – fuming.

Why do I have to be Jewish to know a Rosh Hashanah song?  Why did the girl assume I was different than she?  We were in the laundry room, not synagogue and it wasn’t Shabbat.  Could she really have drawn her conclusion simply because I was dressed less conservatively than her grandmother?

What was clear was this little girl had been taught either directly or indirectly to identify, judge, and draw a conclusion about a person based on one’s appearance relative to the other grown-ups in her life.  As a Christian woman married to a Jewish man who takes pride in raising Jewish children, I felt offended and sad.

This week, my family will celebrate the Jewish New Year.  Rosh Hashanah and Yom Kippur are a time of reflection and new beginnings.  Whether you observe or not, perhaps it’s a good time for us to think about the symbolic gestures we feel bring us closer to God.  Although seemingly benign when practiced with a similar group, the question remains;

Do these gestures create an unhealthy divide, particularly when our children form false and hurtful conclusions based on them?

When all is said and done, I personally don’t think God gives a rat’s ass about what clothes we wore, the food we ate, the holidays we observed, or how many times a day we prayed.

It is how we view and treat each other while we are here that matters.

But let’s be realistic; life is wonderfully diverse and so our lifestyles will vary and symbols sustain.  So in an effort to close the gap, let’s be mindful about consistently teaching young people that all religious and cultural perspectives are valid and deserve respect.

Grandma, you and I may have different ways of approaching our day to day living, but my hope is that we embody the same values.  With this New Year upon us, let’s show our children that when we look beyond the laundry room, we are all mishpacha.