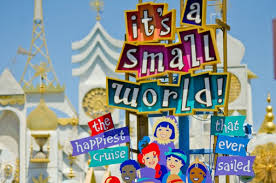 Mac leaned across the handrail to get the lay of the ride’s land as he commentated into the iPhone.  “The happiest cruise that ever sailed.  It’s a Small World is the only thing I remember about my first trip to Disneyland, and I remember everything about it.  Even the boats are the same.  That was 1968.”

My wide-eyed husband entertained our boys with his broadcast as we herded our way around the corral, down to dockside, and into holding pen number three.  Mere seconds passed before our craft expeditiously floated into place.  We boarded, sitting four across in the center row: Me, five-year old Skootch, big brother Bubbe and Mac.

“Mom and Dad, there are 16 in the boat.”  A divine voice with an undertone of Disney princess addressed the crowd from a microphone equip cotton candy hued canopied chair perched above our heads.

Our crew patiently waited for the boat in front of us to move.

The Divine Princess spoke again.  “Sit the child on your lap so there are only 15 in the seats.”

As I thought, Who is she talking to? my quads seized, chest blotched, and shoulders went stiff.

Oh crap! She means us.

The disembarking Happy Boats stacked up behind ours while lines of guests stared us down in the midday sun.

“Take him,” I ordered Mac.  He reached across and hoisted Skootch up.

“I want to sit next to Mom!”  Our brawny boy wrestled his way off of Mac’s lap, knocked into his brother who fell into me.  The ride rocked.  Passengers braced.

“Leave the boat,” I instructed my husband.  Mac returned to the dock to await the next cruise.

“All four of you get off and wait,” the princess summoned.  “I said all four.”

“No!  I want this boat!” snapped Skootch.

I shooed Bubbe to shore and stepped over my stuck puppy hoping his fear of abandonment would set in.

Back in pen three, I stared at the concrete, gripping my boys’ hands for moral grounding until the new boat slipped into place.

Again, we sat four across.

Still displeased, the Divine Princess made a final pronouncement.  “Sit two and two.”

Mac and Bubbe moved up a row.  Skootch stayed with me for safekeeping.

Serenaded by the world’s children, our shipmates marveled at the unfolding spectacle in Mandarin, German, and English as we drifted through the tunnel.

He skeptically squinted at Alice 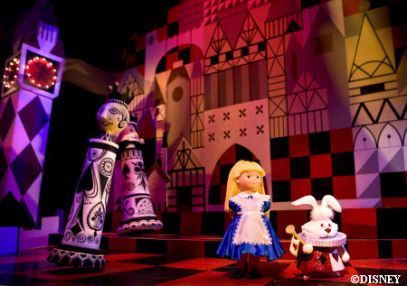 and curiously cocked his keppe at the carpets overhead.

Jiggled ever so slightly to the jarabe

and silently shimmied his way through the South Pacific.

It wasn’t’ until Skootch was embraced by a chorus of children adorned in white and gold that he completely settled into the experience.

Our exiting vessel halted just shy of the Divine Princess’s throne.  “So what did you think?” I asked.

My son looked up with a cheeky grin and sang,

It’s a small world after all.

When Disneyland celebrates its 100th anniversary, perhaps Skootch will be the father leaning over the handrail recording into a device.

“The happiest cruise that ever sailed.  It’s a Small World is the only thing I remember about my first trip to Disneyland, and I remember everything about it.  Even the boats are the same.  That was 2015.

Kids, let me tell you something.  This small world is filled with harmony, variety, and life.  But if you truly want to enjoy the ride, sometimes you have to heed a higher voice, leave Mommy’s lap, and switch boats.”

On a recent visit out west, we squeezed in our first family trip to Disneyland between the measles outbreak and the park’s 60th anniversary.  Recalling our Small World experience at a Passover Seder, we were surprised to hear how many guests could relate.  From getting kicked out of a park for mischievous mischief to being trapped on It’s a Small World, it seems everyone had a Disney story.  This one is ours.

8 thoughts on “What’s Your Story?”